Every day we see something in the news about using hydrogen to power commercial vehicles.

Hydrogen is the fuel of choice for fuel cells. In essence the fuel cell is the “engine” but it does not burn the hydrogen like an internal combustion engine burns diesel fuel, but rather electrochemically converts the hydrogen into electricity and water.

Hydrogen is produced in bulk in many locations in North America today for a variety of end uses in industry, and a small fraction is used today for automobiles and buses in specific regions.

Hydrogen can be produced in many ways with the energy needed to produce it coming from many different sources. The industry has proposed the use of colors to describe the different energy streams for hydrogen. Brown, grey, blue, turquoise, white, yellow, pink and green are some of the colors used regularly and the represent the environmentally friendliness of the source and process used to produce the hydrogen. While hydrogen fuel cell trucks are zero emission at the tail pipe, getting the hydrogen in the first place may not be emission free.

Fuel cells are not new and in fact have been around for more than 70 years. During the last 20 years they have been used in buses and in the last decade we have seen growing use in cars. Their use in trucks is relatively new therefore feedback from real-world customers will be critical in order for manufacturers to rapidly improve fuel cell trucks and fine tune them to the duty cycles used by fleets.

Initially the cost of hydrogen fuel cells in commercial vehicles will be steep, however incentives, grants and other offsets like low carbon credits will make these vehicles affordable for the next decade until volumes have grown significantly.

Comments On This Study Report

“While hydrogen fuel cell technology is very promising, we know that widespread adoption will take time. Many factors will influence this, including emissions regulations, infrastructure, hydrogen availability and total costs of ownership. Buses and trains will likely be some of the first applications to transition to hydrogen, with the Hydrogen Council predicting that heavy- duty trucks will fall further out on the curve with about 2.5% of hydrogen adoption in 2030.”

“There are many variables — dominoes that need to fall — to accurately predict the future for fuel cell vehicles. The technology is promising, and the massive level of investment is encouraging.”

“The costs of hydrogen, vehicles, and hydrogen production all must come down significantly to make hydrogen economically competitive with alternatives. Industry advocates and researchers are confident that these costs will be reduced through scale and innovation over time.”

• Hydrogen fuel cell trucks are just starting to see real-world use and their adoption is being driven by regional or national considerations that are much bigger than what exists for trucking fleets.

• Battery electric trucks should be the baseline for HFCEV comparisons, rather than any internal combustion engine alternative.

• As for all alternatives, fleets should optimize the specifications of HFCEVs for the job they should perform while expecting that the trade cycles will lengthen.

• The future acceleration of HFCEVs is likely not about the vehicles or the fueling but more about the creation and distribution of the hydrogen itself.

• Finally, the potential for autonomous fuel cell trucks to operate 24-hours a day adds significant opportunity for making sense of capital and operational investment in hydrogen.

• Fleet investment in new fuel cell electric and battery electric vehicles requires vehicles. The debate on infrastructure is irrelevant if there is no demand.

• Hydrogen is a regional solution, cheap hydrogen even more so. The ability to scale truck demand will be limited by the nature of truck production volumes and market forces). Purists pushing green hydrogen as a goal should accept that some compromise is needed to allow alternatives in the “how” of getting to net zero-emissions

• Purists pushing green hydrogen as a goal should accept that some compromise is needed to allow alternatives in the “how” of getting to net zero-emissions.

• Stop comparisons of fill times. Fill times are moving targets for both fuel cell and battery electric vehicles. In a zero-emission future world, as in California’s plans, diesel does not exist. What is the value of a comparison on fill times?

• Incentives, grants, credits, tax breaks will be around for a while. Truck production volumes versus zero-emission target dates will require zero-emission transport financial help for some years.

NACFE designed several graphics to clarify various aspects of hydrogen fuel cells. The Hydrogen Color Spectrum graphic contains information on the source of the hydrogen and whether it is carbon neutral.  The Factors for Hydrogen Success in Trucking  illustrates the “dominoes” that need to fall into place in order to make hydrogen viable for the trucking industry. The Consider Hydrogen Fuel Cell Trucks graphic shows the reasons or conditions under which a fleet would consider a hydrogen fuel cell truck rather than a battery electric truck. 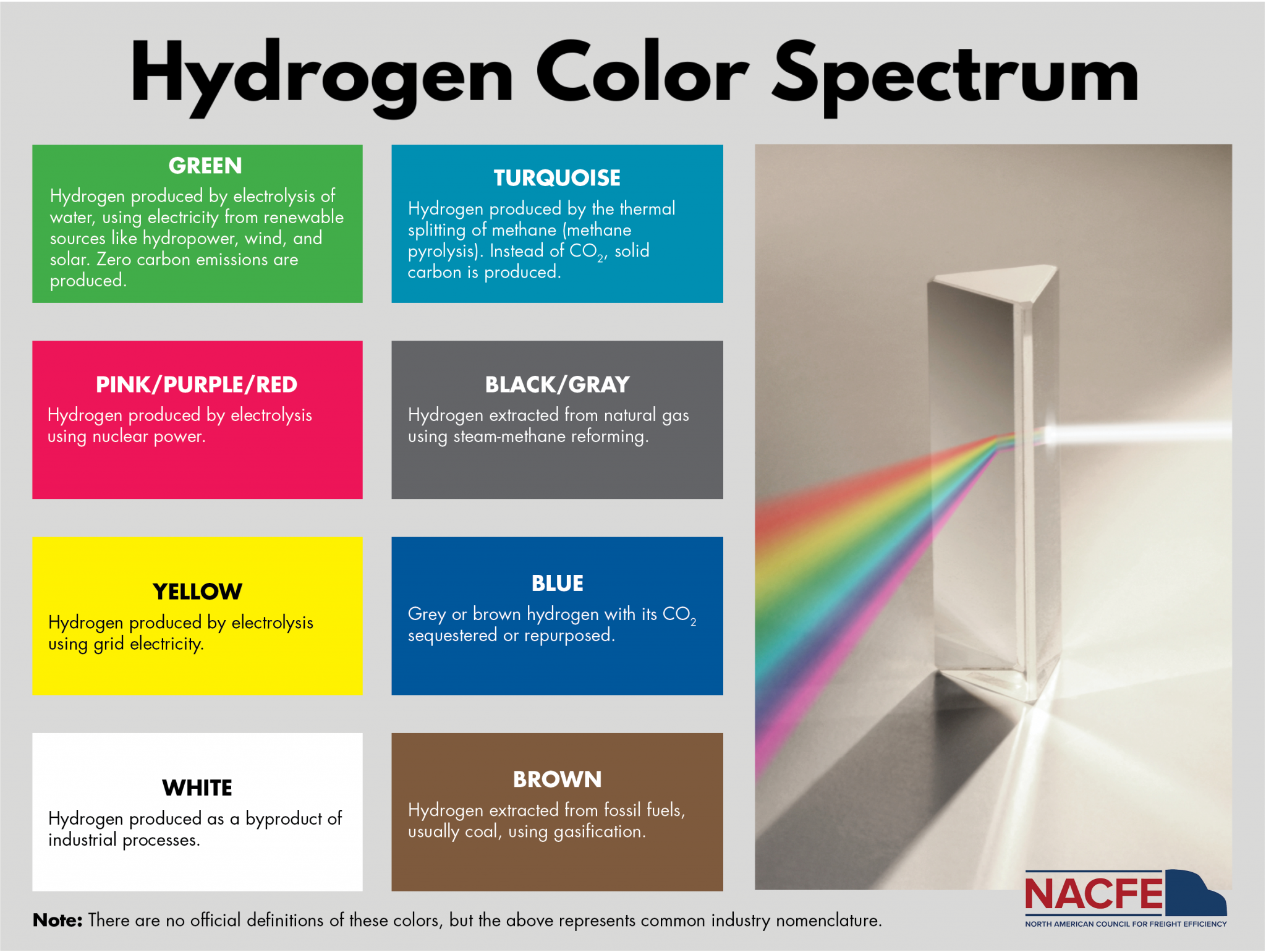 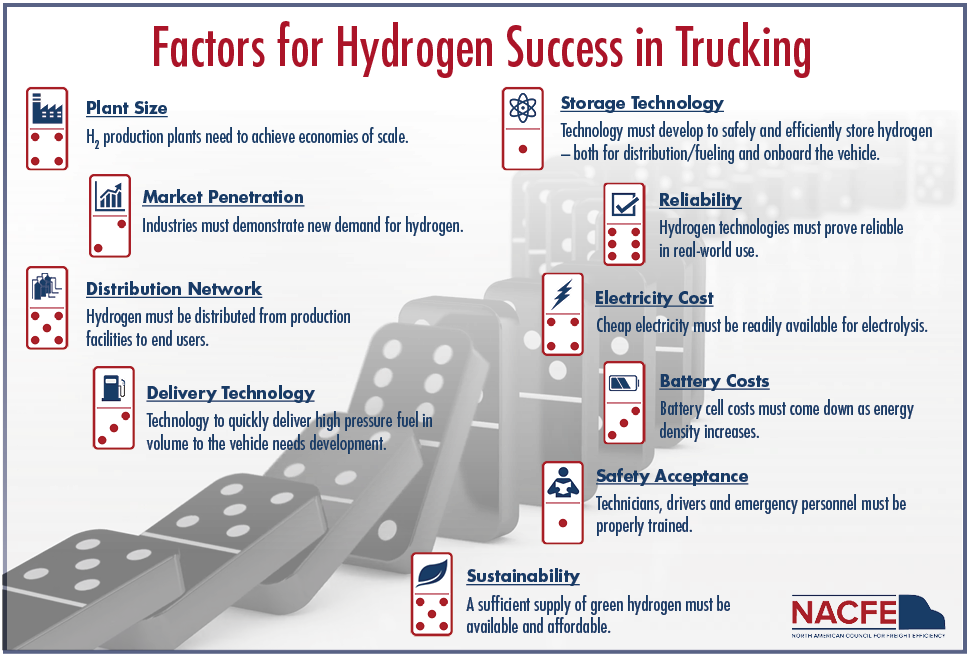 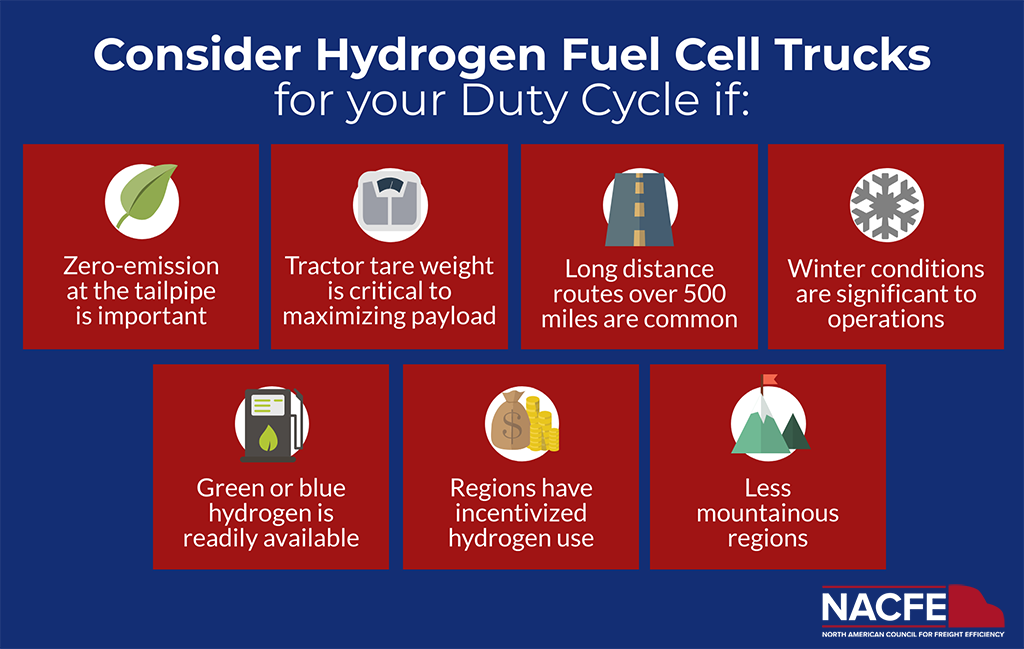